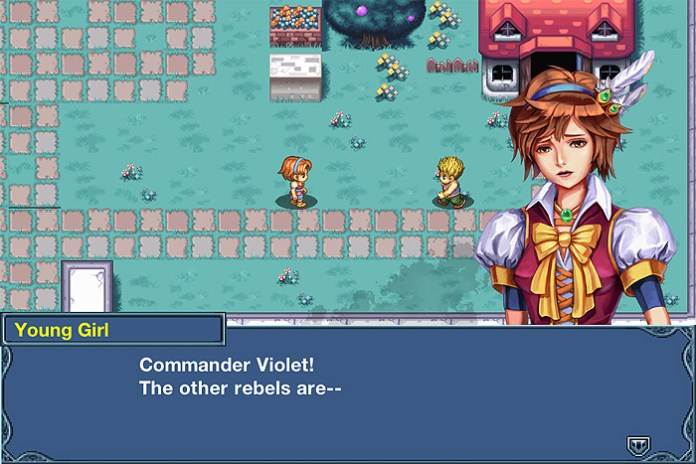 The original Across Age was one of the first role playing games to be released on iOS. The original release was a flawed experience for multiple reasons but its updated release, Across Age DX, managed to fix all of them while adding even more contents. Across Age 2 build upon its predecessor’s formula in a few interesting ways, resulting in yet another really engaging experience.

The story of Across Age 2 begins right from the ending of the first game. Ales and Ceska have defeated count Agrean and saved the future. Unfortunately heroes never get what they really deserve: by changing history, no one remembers about the duo’s deeds. Unfortunately peace will not last long, as Ales and Ceska will soon meet Lily, member of a future resistance movement, who has crossed time in order to kill a future tyrannical ruler before he can obtain the throne of the kingdom and destroy the peace the two heroes have managed to build following the events of the first game.

Across Age 2’s story is really engaging, thanks to the way it’s presented. The trio will be dealing with multiple villains before finally getting to know the true enemy following a cataclysmic event. By doing this, players will always be on their toes, wanting to know what lies after each of the game’s dungeons. An excellent way to move away from the somewhat repetitive scenario of the first game.

The gameplay experience is just as good as the story. The game plays not too differently from Across Age DX: Ales will be fighting enemies with his sword while Ceska will use her magic spells to deal damage from a distance in a top down view, reminiscent of many 16 bit classics. Both characters will learn some new abilities during the course of the game, adding more depth to the experience. They  also come with some unique abilities that are required to complete some of the dungeons, forcing gamers to switch between characters even outside battles. During some specific sections, you will be able to use some other characters, which take the place of Ales and Ceska for story reasons. Unfortunately Lily and Ales Jr. don’t play to differently than Ales and Ceska, making both characters only temporary substitutes for the main ones with no unique qualities.

The Puzzles included in the game allowed the team to make the exploration less dull and more varied. They’re not too hard to complete, to be honest, but it’s hardly a problem, considering the game’s main focus is the action battle system. Puzzles aren’t the only thing that’s easy in the game, as it’s equally simple to avoid traps in dungeons. Death is a rare thing in the world of Across Age 2, something that newcomers to the series and action role playing games in general will surely appreciate. Experts probably won’t.

The game’s graphical look has been clearly inspired by classic role playing games. And it’s not a bad thing at all, considering they’re very well done. with detailed sprites and locations.

Across Age 2 is a very good action role playing game that will keep you engaged for a long time thanks to its plot elements and charming gameplay experience. The only real flaw of the game is its difficulty, as both battles and puzzles are sometimes way too easy. Everything else is very well done, making it one of the best action role playing games available on the App Store.