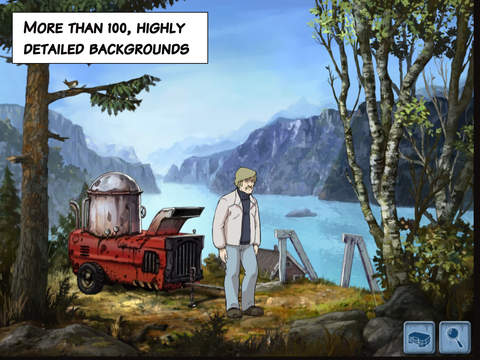 Daedalic Entertainment is a team that requires no introduction for adventure games fans. The team has released several titles offering solid gameplay experiences, interesting stories and characters and plenty of hours of fun. The team is now back on the App Store with a game that has been released a while back on other platforms, the adventure game A New Beginning.

A New Beginning features a very interesting story which is rooted in some of our own world’s problems, such as climate change and the need of cleaner energy sources. In A New Beginning, the world is close to ruin due to the foolishness of man, who has destroyed the environment to a point of no return. To prevent this from happening, a radio operator called Fay travels back in time to make contact with Bent Svennson, a retired scientist who was working on an alternative energy source based on algae. Apparently Bent’s research is of paramount importance for the world’s future so Fay has to do everything in her power to get Bent to resume his research.

Time traveling aside, A New Beginning’s story is very believable and players will likely feel involved in the game’s world issues. The story takes a little while to pick up, as most of the first half of the game is focused on Fay’s story and Bent’s research, but even during these expository sequences there’s plenty to like. Sure, some stuff on algae research might sound absurd, but the way it’s presented makes it interesting.

Unfortunately the A New Beginning story fails to live up to its full potential due to a few issues. The writing is generally decent, not counting the weirdly translated sentence here and there, but the voice acting completely ruins immersion, with delivery feeling often forced or just plain wrong. A true shame, considering how much potential the story has.

If the game’s story can be hit and miss due to the weird translation and bad voice acting, the A New Beginning actual gameplay is excellent from beginning to end. The formula is not revolutionary in any way, as it’s your standard point and click adventure game, but the puzzles really make it remarkable. Unlike other similar games, puzzle in A New Beginning can be completed without leaps of logic or making objects interact in seemingly random ways. There are a few frustrating puzzles but thankfully it’s also possible to skip them and continue with the game. Most hardcore adventure games fans won’t probably need to do so at any point in the game but it’s still nice to have options that make the game more enjoyable for less experienced players.

Another area where the A New Beginning truly shines is the presentation. Cutscenes are done in a comic book style that’s been done over and over again but the actual hand-drawn style employed during regular play is very good, vastly enhancing immersion. The A New Beginning beautiful graphics actually enhance the gameplay experience, as they provide plenty of claritity when looking for objects to interact with during puzzle solving sequences.

Point and click adventure games can be considered good games depending on how good story and gameplay mesh together. In A New Beginning the actual gameplay is as good as possible, with very good puzzles that are never excessively frustrating but the story leaves something to be desired due to the uneven writing and bad voice acting. For this reason, it’s really hard to recommend the game to anyone except Deadelic fans. Everyone else will probably need to try the game out before purchase to make up their mind. A New Beginning is a quality game without a doubt, but some of its flaws prevent it from being a must have.