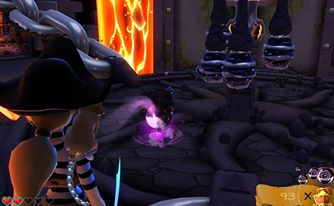 There’s nothing like playing a well developed platform game, especially on the go. While there aren’t many of these games available on the App Store, as the mobile audience prefers different kinds of games, a new platform game could be released in the future. As you might have guessed from that “may”, it all depends on you.

Pirates of New Horizons is a platform game that was being developed for PC. Unfortunately the project never materialized and it looked like these pirates wouldn’t ever be able to set sail.

However it looks like the game has been resurrected as an iOS game, with a Kickstarter campaign that should help get the required funds to complete development.

Pirates of New Horizons looks like your usual colorful platform game, with big 3D levels to fully explore in search of collectibles and more. The game stars the sky pirate Annha and her flying cat called Professor Henceworth as they roam through the galaxy to find gold to buy Annha’s dream house.

While not many gameplay details are currently available, some early footage showed Annha as she traveled through the stages using multiple gadgets and it looked quite fun.

If you want to help the team complete the development of Pirates of New Horizons and release the game on the App Store, you can head over to the Official Kickstarter page for the project. With only 5$ you will receive a copy of the game once development has been completed.