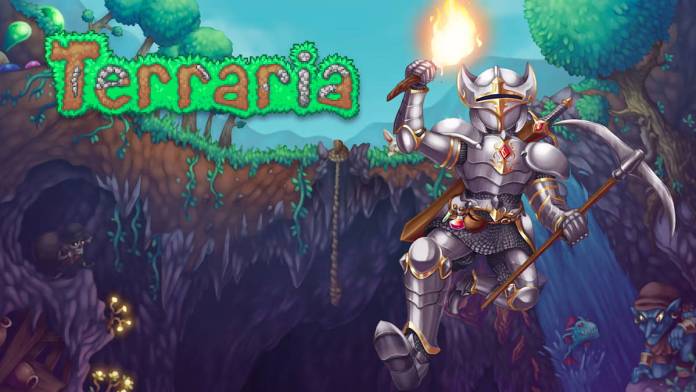 Terraria, since its original release back in 2011, has gathered quite the following. The game is known as the one of the best 2D action adventure crafting games. If you’ve beaten the game, you’re probably looking for another adventure to sink your teeth into, so we’ve got you covered with today’s list—here are 10 games that are like Terraria!

Grounded is Obsidian Entertainment’s (Fallout: New Vegas, Pillars of Eternity) first attempt at a survival adventure game, and boy did they make quite the first impression!

Grounded is essentially if you took Honey, I Shrunk the Kids and turned it into a survival game. Players take control of one of the four kids, who are now the size of ants, and lead them through a dense forest that is actually their front lawn. You’ll battle insects, collect materials, build a base, and take on massive boss bugs to find a way back home.

Players take control of an unlucky character who is trapped in a nightmare world known as “The Constant”. Scavenge for food, build shelter, and survive the elements as you search for a way out! But beware, as you are not alone in The Constant…

You are a heroic warrior who has met their end in battle, and now you’ve been transported to the tenth realm: the purgatory land of Valheim.

Do you like the building aspect of Terraria, but wished it was more of the focus? In Dig or Die, players crash-land on a hostile alien planet full of extremely aggressive fauna.

During the day, you’ll need to explore the land and collect materials, then build up a fortified base. Hordes of aliens will attack during the night, so prepare your defenses by building turrets, traps, and more!

You are a simple alchemist who loves to create new concoctions, but suddenly you’re transported to a strange new world one day. Armed with nothing but your alchemy and herbology skills, you set out to find a way back home in Alchemage.

This game is pretty much Terraria in all but name, as you’ll be exploring the world in this 2D survival game, fighting monsters and tough bosses while creating new potions to help you on your journey.

It Lurks Below is another Terraria clone, but with a far greater emphasis on combat. The game is another 2D platforming survival adventure game, but now you can equip your character with all sorts of gear with random modifiers on them.

Combat becomes the main focus as you’ll be fighting against hordes of demons, with shiny new loot at the end of nearly every encounter. Think Diablo meets Terraria!

Craft the World is an ambitious game as it’s self-referred to as a mixture of Dungeon Keeper, Terraria, and Dwarf Fortress. Explore a randomly generated world, collect resources, and build up a fortress full of NPCs that you can control.

Related | How to Get Holy Arrows in Terraria

The last of humanity has crash-landed on an uninhabited island, and the only way to reach the stars is to build up once more! Aground is a 2D survival RPG game where players will explore the island, collect resources, and advance their civilization to bring humanity back up.

You’ll start off small and humble, living in straw huts and donning caveman gear, but eventually you’ll reach the skies (literally) and even encounter dragons!

We couldn’t write this list and not include the game that started it all: Minecraft. With both games coming out roughly around the same time, Minecraft and Terraria have enjoyed a friendly rivalry since the beginning.

Minecraft, just like Terraria, is the game where you can do anything. Explore the world, search for valuable materials, build up a fancy base, or face off against tough bosses!

Coming only a few years after Terraria‘s original release, Starbound is Terraria but on a grander scale. Instead of just one huge world to explore, Starbound has multiple planets for players to discover and explore.

You’ll still be hunting for precious minerals to use for base building, and you’ll also fight massive bosses, so there’s a lot to love here for fans of Terraria. There are also multiple playable races, each with their own unique abilities.

For those into lore and world building, there’s a lot more backstory in Starbound than there is in Terraria, so if you’re looking for an interesting world to discover, there’s a huge universe to explore here.

And there you have it! We hope this list helps you find your next big game to play. Do you have another game that’s like Terraria that isn’t on this list? Let us know in the comments below!