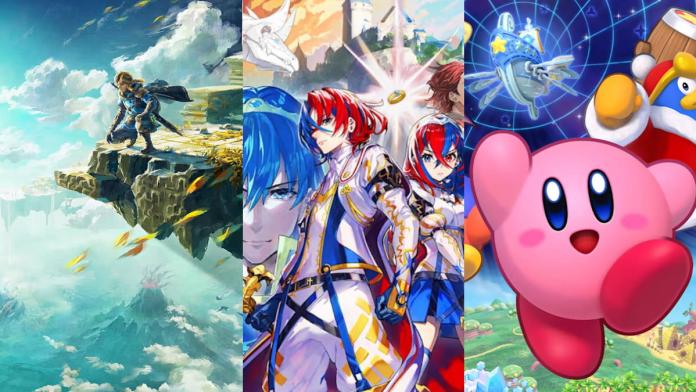 Despite being five years old at this point, the Nintendo Switch is showing no signs of slowing down. The Switch’s portability potential proved to be the console’s defining feature, letting players enjoy full titles on the go. With a new year just around the corner, that means more games to play anywhere. Here are the top 8 Nintendo Switch games in 2023 we are looking forward to!

There’s obviously one huge Nintendo title that is on the mind of every Switch owner, but before we get to that, why not check out these other games you might be excited about?

Though it’s never been in the spotlight as much as other survival horror franchises like Resident Evil and Silent Hill, the Fatal Frame series holds it own as a spooky adventure into the supernatural. Armed with nothing but an otherworldly camera, players must navigate their way through haunted locales, fighting off vengeful spirits to see the light of day.

Kirby’s excellent adventure on the Wii is getting an HD makeover! Kirby’s Return to Dream Land Deluxe is a remaster of the original 2011 game, featuring updated graphics, new Copy Abilities for Kirby to utilize, and brand-new multiplayer mini-games for everyone to enjoy.

The Front Mission series is a long-lost tactical RPG series by Square Enix, who you probably know for the Final Fantasy games. In a similar vein to the Live-a-Live remake, Front Mission 2: REMAKE is a full HD remake of the original 1997 PlayStation release, featuring updated graphics, a remastered soundtrack, and new customization options for your Wanzers – giant mechs, essentially.

When it was revealed during The Game Awards 2022, Bayonetta Origins: Cereza and the Lost Demon looked very interesting. It’s a far-cry from PlatinumGames’ usual high-octane affairs, much less a Bayonetta game, but we’re already interested thanks to the unique art style and story. We’ll be keeping an eye on this one.

The Pikmin series is one of our favorite Nintendo series, and it’s been roughly 8 years since Pikmin 3, so it’s about time the series is getting some love. Nintendo finally showed another short teaser for the game, and we got a glimpse of a Bulborb sleeping in what seems to be a park. We hope to see more details later!

1. The Legend of Zelda: Tears of the Kingdom

Let’s face it—there’s no other Switch game that could be up here. The Legend of Zelda: Tears of the Kingdom has been teased only a few times, and it’s just driving us crazy for more. Breath of the Wild was a hit with many players, and we’re excited to see what new ideas are in store for us when we finally get to explore the mysterious floating kingdom in May.

That concludes our list of the top 8 Nintendo Switch games we are looking forward to in 2023. What games are you most excited for next year? Let us know in the comments below!