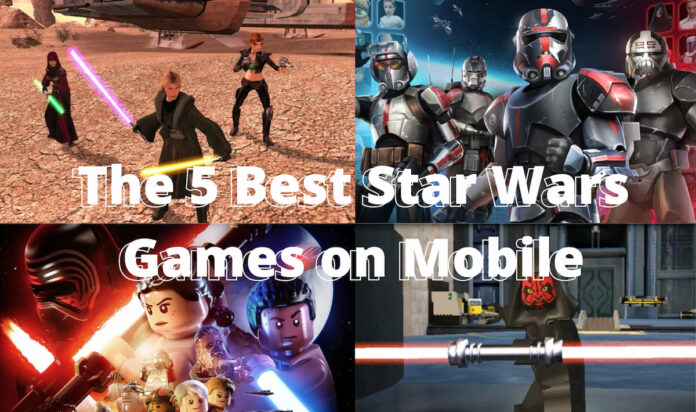 The Star Wars franchise is one of the longest reigning franchises in the world and it only keeps getting bigger. A lot of Star Wars titles have been released on the mobile platform over the years and while some of them failed to deliver, they were eventually discontinued or removed from the respective App Stores.

In Galaxy of Heroes, you get to experience the thrilling Star Wars experience of fighting with your favourite light and dark sided heroes across several locations in order to become the master of the entire galaxy. The game lets you create your squad using iconic characters from every Star Wars era and use them in turn-based RPG battles.

You can also engage in starship battlers using the iconic starships such as the Millennium Falcon and Capital Ships like Admiral Ackbar’s Home One. You can progress to the point of constructing your own champion war fleets as well.

This is one of the most acclaimed Star Wars titles on mobile till today due to its brilliant design and captivating story that puts you at the heart of the Republic itself. After the Galactic Empire and Jedi Knights fell to the Sith, you are the last hope of restoring the Jedi Order and save the Republic..

On this dangerous quest you’ll have to master and use the power of the Force and face-off against iconic Star Wars villains. You can use over 40 different abilities and fight using your own lightsaber. The controls can a take sometime to master but the game offers one hell of an adventure. Can you save the Republic? Or will Sith lure you to the dark side?

This game lets you experience an entire collection that merges the original LEGO Star Wars on your mobile device. You get to enjoy all the original trilogy in hours of gameplay where your adventure kicks off from Star Wars: Episode I The Phantom Menace and journey through all six episodes.

Enjoy up to 36 story mode levels plus additional contents and play using more than 120 iconic characters from the Star Wars universe such as, Obi Wan Kenobi, Darth Vader, Han Solo, Luke Skywalker and even Boba Fett. Being able to use characters from the dark and light side, you’ll have to choose whether to be good or evil.

Lego Star Wars: TFA is an exciting game that lets you immerse yourself in an authentic Star Wars adventure like never before on mobile devices. You’ll explore new locations and experience previously untold stories as well. The gameplay mechanics offer a stylised LEGO experience by adding new features like Blaster Battles and Multi-Builds.

The Multi-Builds system allows players to solve puzzles to progress or just solve them for fun. The game offers unique action advances and overall an enhanced gameplay with improved fight sequences that allows you leverage your surroundings in battle by using things as cover.

Star Wars: KOTOR II improved a lot on the first game and offers an impressive gameplay mechanics that simply earned it the number one spot on our list. The game picks up five years after the events of the highly acclaimed Star Wars: KOTOR.

The Old Republic has been crushed and the Jedi Order remains in ruin. You play as a lone and wandering Jedi who is struggling to reconnect with the Force. On this adventure you’ll also have to make the ultimate choice to follow the light and save the Republic or choose the dark side and further destroy the Republic.