Home Apps & Lists The 15 Best Gacha Games for Android and iOS to Play in... 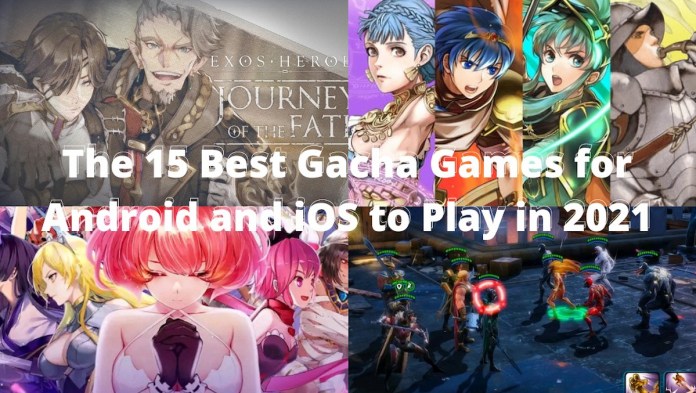 The Gacha genre is an exciting game genre that has rapidly gained traction in Japan and other parts of the world. Typically, in Gacha, the eponymous mechanic is used, in which you utilize something akin to a vending machine to obtain random virtual items such as new characters, outfits, and armour.

Gacha games presents players with the ability to design their own universe with a cast of powerful characters. They’re characterized by elements of old school, combat mechanics in thrilling jRPG, interesting storylines, a lot of in-game events, and often online multiplayer.

In this article we’ve compiled the 15 best and most exciting Gacha games that you can play on Android and iOS in 2021.

Genshin Impact is arguably the best open world game on mobile right now Gacha elements that’s coupled with enticing storyline, gorgeous world, massive map and interesting characters. You can build up a team with diverse characters with each of them having their different personalities, stories and abilities.

The game’s co-op allows you play together with friends across different platforms. Together you can face up to tough bosses and work together to defeat them, conquer domains with friends and collect handsome rewards, or just explore the gigantic open world and enjoy its beauty.

This is an interesting Gacha game that lets you embark on a fascinating journey beyond time and space in hopes of saving humanity’s lost future. Failure to complete this quest will see the darkness of time befall the world.

Another Eden offers players with an extensive amount of content on mobile which consists of a single player large scale RPG, an epic story that allows crossing between present and future, and fascinating soundtracks of more than 60 songs that were composed with orchestras and folk music.

Tales of Erin is an original Japanese story-focused mobile RPG that combines action, drama, tactics, and fantasy in a cold war between God and humanity. Players can summon over 80 heroes, harness the arcane power of Divinity, and change the fate of the world.

The game offers tons of high-quality material and designs such as 3D Divinity animations and breathtaking anime-styled cut sequences as well as excellent music, voice acting and a captivating storyline. The amazing graphics is a a next step for the mobile gaming platform as well.

In order to save the dying world of Teleria, you must recruit and assemble the most legendary warriors from the forces of light and darkness. You must train them to fight alongside each other and turn them into formidable weapons against enemies by putting together the most powerful raiding party ever.

This thrilling Gacha game allows you battle your way through a visually stunning fantasy RPG world with hundreds of champions from 14 playable factions. You can also team up with thousands of other players in co-op clan challenges as you slay demons and monsters for epic chests.

This is a swipe-controlled Gacha action RPG game that tells of the bonds that’s shared between dragons and humans. You’ll be required to dominate and conquer your enemies using a variety of powerful attacks and special skills, some of which even let you transform into a Dragon.

The game offers tons of features and lets you experience the tale of heroes, legends and allies. There are over 60 voiced characters with each of them ready and waiting to assist you on your quest.

In this game, legendary heroes and villains from the FINAL FANTASY franchise join forces in a gripping tale of mighty deities and a world in jeopardy. Fans of the series will see their favorite characters in a brand-new adventure, while newbies will be introduced to the FINAL FANTASY series’ fascinating plot, drama, and intense action!

Players can engage in turn-based combat that is both simple and strategic! As you build up your Bravery and wait for the best moment to attack, the unique Bravery system pushes you to balance offense and defense! Dissidia Final Fantasy offers tons of contents that the franchise’s die hard fans will appreciate.

The Alchemist Code is a fun blend of true tactical elements and a wealth of high-quality content, including intense 3D animations, breathtaking anime-styled cutscenes, and excellent music and voice acting!

The game offers a classic turn-based battle system, 3D terrains, deep and dozens of character customizations. You can collect and summon over 50 gorgeously designed characters and master a variety of jobs classes. If you can play your cards wisely, you just might grasp Alchemy’s magical power and change the fate of the world.

From the hit manga and TV anime series comes Bleach, a 3D hack and slash action game that faithfully reproduces the story of the original Bleach anime series, manga and even novels. The game is beautiful adapted from the anime series and offers tons of features on the mobile platform.

Players will get to use some of the most iconic Bleach characters from the 13 Court Guard Squads such as Xcution, Espada, Stern Ritter and others. You can build various teams with your character and experience the hit anime series on the palm of your hands all over again.

The magnificent 3D images and animations in this Dragon Ball anime action RPG game help tell the original story based on the brand-new character Saiyan, also known as Shallot! Join Shallot and the other Dragon BallL characters in helping him restore his memory and save the planet!

Play with Goku, Vegeta, Trunks, and all of your favorite Dragon Ball characters in this action-packed anime RPG. The game offers an easy card-based attack gameplay, intuitive controls, and high-quality 3D animation and visuals. On mobile devices, this game ​features some of the best anime fighting scenes.

This is a mobile real-time strategy game with Gacha elements that allows you to build your Radiants, and socialize with them in a myriad of social modes! The game offers more than 50 Radiants at your disposal, and lets you create your own unique lineup to dominate the Nightmares!

Players can engage in real-time battles, command radiants, experience the intuitive tactical combat system that allows you devise various strategies by coordinating your radiants with the primary character. Using your radiants, will you answer the call of justice and fight to defend reality?

In this action-packed, aesthetically gorgeous free-to-play game, prepare to battle arch-rivals as the Earth is under attack, and Super Heroes and Super Villains are teaming together to save it!

You must assemble your ideal team of Marvel characters, including Doctor Strange, Venom, Spider-Man, Captain America, Iron Man, and others, to lead the charge. Can you save the universe using earth’s mightiest heroes?

This is an animated RPG game where you must enter the 7th world and get lost in more than 1,000 of its stories. Players will experience a fully playable 2D animation, gorgeous skill animations and 2D Cutscene-quality animated graphics.

Epic Seven is an epic tale for the modern age with its strategy shaped story, dual attacking system that’s affected by the character’s relationships. It’s time to immerse yourself in all the stories and craft your own strategy.

In Exos Heroes you can kickoff your adventure by riding on the ancient airship that’s awoken from a deep slumber and take it all the way to the mystical fantasy land where airships roam freely without hindrance.

You’ll play as the captain of the airship and explore the vast world, team up with ancient dragon Bitru and treasure hunter Zeon in this original RPG and experience a captivating story in a unique world.

Take part in strategic turn-based combat with maps that fit in the palm of your hand, simplified for on-the-go play! You’ll have to consider the benefits and drawbacks of each Hero’s weapon and even analyze the terrain itself as you fight.

The game offers easy touch-and-drag controls that allows you to command your army, including the option to assault by just swiping an ally over an adversary. There are over 1,500 story stages available and fascinating story where new characters and dozens of battle-tested Heroes from across the Fire Emblem universe meet.

This game features a HD cel-shaded graphics combined with ultra-tight controls, infinite amount of combos and ultimately offers a real-time next-gen action for mobile players. The game’s epic storyline is one to experience over and over again due to its immersive stage dialogues and fascinating characters.

You must tribe to become the center of the legend and gain access to several elements such as open world exploration, Valkyrie customization, baseline building, shooting, racing and co-op. Join the Valkyries in the war against Honkai and strive to save the Honkai universe.