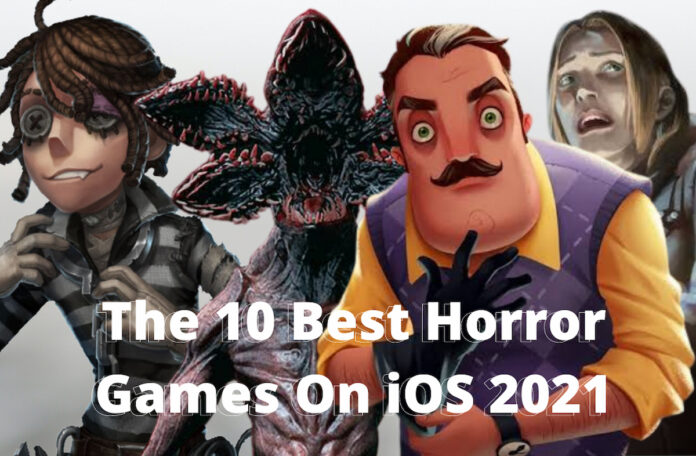 The horror genre is one that gets your heart rate racing with its spooky and terrifying collection of games. We’ve seen some of the most iconic horror games make their way to the mobile platform in the past such as Telltale’s The Walking Dead, Life After and many more.

So in this article we’ve compiled the 10 best horror games that you can enjoy right now. If you want a game that will make you jump off your couch, then scroll through our list of the most terrifying horror games on iOS 2021.

After being in the hospital for more than two weeks, you wake up at midnight on the day you were supposed to be discharged only to realize that all the patients at the hospital had disappeared, leaving just you and your friends. All doors are locked, you find our the place is haunted and must figure out a way to escape its horrors.

The Ghost offers an exciting and spooky gameplay that allows you play with up to 5 players in co-op or play as a sole survivor in single-player mode. You can even decide to play as a ghost and stop your friends from escaping the haunted hospital.

Peet’s girlfriend had been in a coma for a long time. After suddenly waking up, she disappeared and was nowhere to be found. However, you can hear screams coming from the heart of the town which you venture out to investigate alongside bizarre behaviours of a zombie group that will help you uncover the truth about Peet’s mysterious past.

On this quest you’ll stumble upon the haunting halls of Blackfork Asylum where you will explore six of its spooky and moody levels. Fight bosses, monsters and zombies using your trusty baseball bat. The game also offers an incredible soundtrack that blends well with the story.

This is an exhilarating and terrifying horror game that was inspired by iconic cult classic slasher movies. The game is a 4vs1 horror and action multiplayer game where you must escape an unforgiving killer who will stop at nothing until he hunts you down.

The game also offers different modes such as playing as both killer and survivor, or playing hide and sick. You can also team up with friends as a team of survivors where you can try to outlast them all and escape a gruesome death from some of the most iconic horror antagonists ever.

The word Chernobyl always rings a bell for most people and especially those that are familiar with horror classics. This game lets you dive into the darkness and horrors of the Chernobyl power plant where you must unravel the unsolved mystery from Radiation City, and find out what happened to a woman named Lauren.

The game offers open world exploration in its medium sized map with tall buildings and an environment that offers a true sense of an experimental facility filled with zombies that want to eat your brains. Players must scavenge in order to survive, fight the deadly zombies, and learn new combat skills.

Are you leaving close to a scary and mysterious neighbor that you’re too scared to approach in real life? Well, now you can. Hello Neighbor is a stealth-horror that lets you sneak into your weird neighbor’s house and try to find out what horrible activities are going on in his basement.

This is a unique and interesting horror game that allows you play with other players in real time. You must escape an angry and ruthless butcher with your friends. Each of you have a special set of abilities that can help you survive the mad butcher.

The basketball player can run away from the butcher really fast, the doctor has healing abilities, the engineer can instantly fix up broken generators and craft new items, the thief has impressive stealth that allows him move unnoticed, the mercenary is brave with high morale, the scientist can upgrade weapons and the police officer can apprehend the murderer.

This is a terrifying horror game that features an intensive 1vs4 Asymmetrical combat system. Four survivors must try and escape from a ruthless killer who dresses like a clown. Players must cooperate with teammates and figure out ways to escape the killer in this foggy and spooky environment.

You must decode cipher machines and open the gates to escape with friends or as the only survivor. You can also play as the ruthless hunter and familiarise yourself with various types of killing methods and prepare to capture and torture your victims.

This is a third person horror psychological survival game that combines puzzles, action, survival, exploration and action with an interesting gameplay that focuses on fear mechanics. You will play as Rose Hawkins, an independent woman searching for Eden, a missing child. Rose must face her deepest fears and uncover the mystery behind the missing child.

The game offers a captivating story and a climatic psychological horror experience. You will experience its amazing visual effects, near-perfect touch and gamepad controls, and a fair game experience which means there are no in-app purchases of any kind. There are no weapons, no boosters, or any pay to win element that will impact your experience. Your investigative and fearful side shall be tested.

After an experiment gone wrong, you must save the rest of the world by heading to Antarctica in hopes of containing the spread of the outbreak. You’ll immerse yourself into the Sci-Fi story that’s filled with hideous monsters, and creatures that you must defeat.

The game offers an exciting adventure and a fine storyline with multiple endings. You’ll encounter various types of monsters and weapons, amazing graphics, challenging puzzles and an intense gameplay with a spooky atmosphere.

This game is a fantastic remake of the PC version White Day: A Labyrinth Named School. The game is set in Korea and starts off pleasantly outside of Yeondu High School. You play as the protagonist Lee Hui-min, a new and unassuming student. The game captures a distinct Asian atmosphere with legends and mysteries.

The storyline follows a bunch of students who find themselves locked in the school at midnight with no way of getting out. As you try to find out a way out, you’ll encounter possessed janitors, ghosts that are unable to rest due to their mysterious pasts and other terrifying dangers. The game’s graphics are amazing with interesting characters. It’s a horror game you have to try!