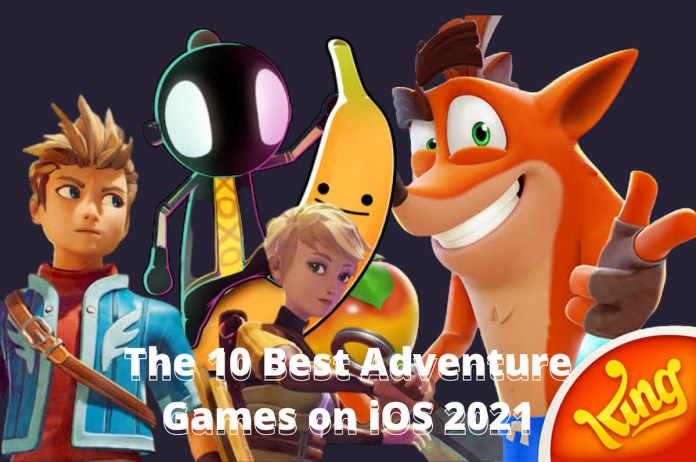 There are so many genres of games on the mobile platform. Arcade games offer endless runners that lets you evade, dodge or jump or obstacles. Strategy games let you own and control your army or kingdom and build it up while also protecting it from enemies.

The adventure genre on the other hand, is one that lets you solve a mystery or pack your bags and head out on an exciting quest. So in this article we’ve listed the 10 best adventure games that you can on iOS in 2021.

This is a thrilling adventure game where you can sketch, paint, and solve variety of puzzles in order to uncover a fascinating tale of chance and artistry. The game offers a vivid interactive fiction that focuses on an aspiring artist who is on the brink of completing the final piece of her gallery submission.

You will experience an eloquent and relaxing gameplay that you can play at any pace and become immersed in a panoramic world that’s filled with gorgeous resplendent colours and hand-animated visuals to amp up your gameplay experience.

In this game, players will choose their travelling party, pick them up, fill their travelling wagons with supplies and embark on a daring adventure that’s filled with unforseen dangers, unanticipated situations which will require you to make lots of tough decisions.

Can you survive the harshness of nature in the wild? Because you’ll come across blizzards, snakebites, starvation, broken limbs, exhaustion and wild animals as you try to strive to navigate an untamed frontier in order to get their party to a new and better life in Oregon before winter arrives.The game offers an interesting story and unique gameplay that you don’t see on mobile everyday.

In a realm where machines are in control, the balance of chaos and order becomes a key factor within this multi-dimensional universe where the gods wish to take control of them. You will play the role of Leo, who awakens after a devastating explosion only to realize he’s lost in a strange world where he remembers only one thing.

You will then set out on your quest to reclaim your character’s memories where you’ll unravel the mysteries of the world’s mechanical infection which is gradually engulfing all of mankind. The game offers a captivating story and a relaxing soundtrack that takes inspiration from Final Fantasy.

In Unruly Heroes you’ll embark on a perilous journey as master with your three disciples where you must battle enemies, solve puzzles, collet looted items and many more on this mystical demon-slaying adventure.

The game offers impressive combat and special attack skills where you can also use holy relics to fight demons and strive to complete your pilgrimage in reuniting the holy scripture. Players will experience a gorgeous and fantastical art style combined with a hilarious plot.

This is an exciting new endless runner where you play as the famous Crash Bandicoot. You’ll have to think really fast to avoid dying as you’ll have to jump, run, spin and smash boxes and avoid obstacles using both Crash and his sister Coco.

You’ll explore mysterious lands, battle Doctor Neo’s henchmen, and use the dozens of available customizations on your characters such as skins, arsenal filled with weapons, and amass lots of rewards with your ability to run and evade.

This is an adventure game that tells the story of college dropout Mae Borowski. The game allows you to explore the protagonist’s story and relive her character. You’ll meet dozens of other characters in this game and there’s a lot you can do in a lush and vibrant world.

You can play bass, take a stroll on powerlines, hang out, jump from roof to roof and ultimately discover both strange, incredible and terrifying things you never thought you’d find.

In this game you’ll experience a massive and gorgeous world that you can explore and collect scraps to help you survive. On this adventure you’ll encounter enemies as well as new interesting bot characters.

You can uncover lots of bitten secrets in Botworld and collect rare treasures. The game also allows free roaming within the forests and desserts but be sure to keep a powerful bot company because you never know what could be hiding in the bushes.

This is a life simulation game where you’ll go camping on a haunted and ever-changing island. You’ll play as a Spirit Scout whose objective is to wander around the island’s forest everyday in search of hidden dangers and help soothe the local ghosts and ultimately bring joy back to the Cozy Grove.

The game offers a beautiful, dynamic and hand-drawn landscapes that come alive whenever you help a spirit. There are tons of characters that you’ll meet and befriend and each of them have a story for you unravel over time. You can collect spirit animals, go fishing and even decorate the island.

This is a survival horror game that lets you play as a detective and solve mysteries like never before. You’ll have to connect all the pieces of challenging puzzles, scroll through phones and find useful clues.

If you find a phone, you’ll have access to emails, videos, messages, photos and more that’ll help you in solving the mystery. You’ll also work alongside an interesting partner named Petronella Osgood and together you’ll investigate terrifying events and come face to face with an evil you’ve never seen before.

This is an action-adventure game where you must embark on a dangerous quest to to help your friend Pedro get revenge on those who kidnapped his wife and kids. The game offers a captivating gameplay that takes heavy similarity with Johnny Trigger, another action shooter.

In My Friend Pedro you’ll be out for blood as you fight your way through 37 rigorous levels on foot, on a motorcycle and at some point, you’ll blast enemies in the head on a skateboard. The game controls can take a while to master but ultimately it’s a fascinating game with really good graphics.