Buying stuff online is second nature now. In fact, if you’re under 25 it’s probably first nature. Whether you’re after clothing or food, new or second hand, fixed price or auction, you can conduct every kind of transaction imaginable from the comfort of your sofa.

So what is DrakeMall? It’s a novel e-commerce site selling a wide variety of products including jewelry, toys, luxury cutlery, sporting goods, and high-end consumer electronics.

It doesn’t sell them in the normal way, however. Instead it sees you buying credits (Visa and Mastercard are both accepted) and using these to open different themed boxes. 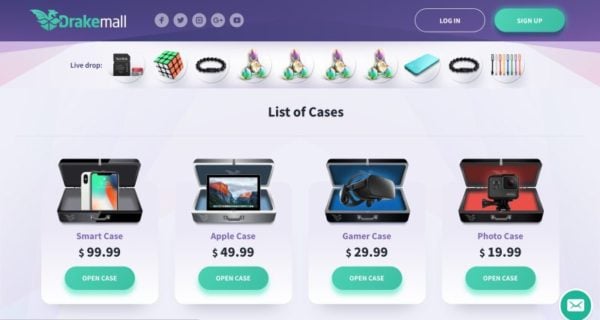 The contents of these boxes will be constantly tweaked to keep things fresh, but here’s a little sample. The $14.99 Android Case contains, among other items, a Samsung Galaxy S9 worth £1000, a Galaxy Tab S3 worth $550, and a micro USB cable worth $3. Sounds too good to be true, but’s no scam.

Before opening a box you can take a peek at its contents, but what you end up with is pure chance. If you don’t like what you win you can sell it on for more credits with which to open more boxes.

If you’re chuffed with your $15 Samsung Galaxy smartphone, however, you can request Drakemall delivery. Either way, the item will remain in your inventory until you decide what to do.

It’s also worth noting that you don’t have to win every product on the site – if you have the cash you can buy something instead. And even sell it on if you wish.

DrakeMall probably won’t suit you if you’re in the market for a specific product, but if you’ve got a bit of spare cash and you fancy treating yourself we think this looks like a fun way to indulge yourself, with the possibility of picking up a truly staggering bargain.

It’s simple to sign up too – you just need an email address, or you can even register directly via your Facebook, Twitter, or Gmail account. You’ll soon be kicking yourself for ever asking “is Drakemall legit?”