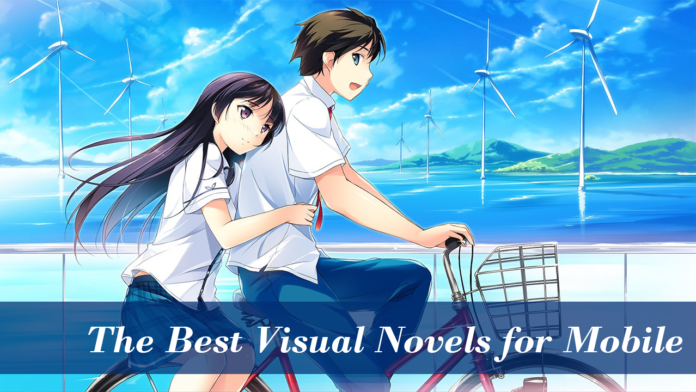 Do you like to indulge in the occasional visual novel in your spare time? So do I – and therefore, I’ve compiled a list of the best visual novels for iOS and Android you could play today.

No matter if you’re into horror, realistic, or anime visual novels, I am sure there is a title for you in this list. So, without further ado, let’s take a look at the best visual novels for mobile!

It might (or might not) come as a surprise that I put To the Moon on this list. For those of you who haven’t heard of the game, it is a role-playing, pixel-graphic visual novel rather than a typical action-packed game. You can find it for PC as well, but here we’ll focus on the mobile one.

I will not spoil the content per se, because you should go ahead and play it. But, I will say that it’s going to make you burst out laughing, make you question some things you’ll encounter in real life, and probably make you shed a tear or two (it legit made me cry, but let’s not get into that).

To the Moon is simply amazing – it poses concepts you might not expect from a game, and it does that in a very easy-to-understand way. I played it 3 times to completion, and it kept me entertained every single time.

If My Heart Had Wings Ltd. Ed.

This anime-themed visual novel is ideal if you’re trying to get the slice-of-life experience first-hand. The story in this game is very simple, relaxing, and has an overall good vibe about it. From the visuals point of view, the game’s graphics are top-notch.

So, I definitely recommend it if you’re trying to find a great visual novel to draw you into the genre. Also, if you’re a VN enthusiast and you haven’t played If My Heart Had Wings yet, then you should go and download it right now!

This fascinating game is not what you’d expect it to be. Of course, it’s a visual novel, but it has an underlying theme that you will discover once you start playing. I am not going to dive into too much detail, but it’s definitely something you would not expect.

Also, don’t let yourself be taken aback by the rather unusual graphics of the game. They are not your typical anime graphics, but they have a certain charm. So, definitely give this game a try if you want a romantic visual novel with a twist!

Are you looking for a visual novel that will make you dwell over certain decisions and drive you to second-guess your choices? Alter Ego is one such VN – it’s not your typical romance-filled anime interactive visual novel or even yandere visual novel. Instead, it’s much more complex.

If you’re constantly trying to find an app (and even more so a game, or visual novel) that will challenge you psychologically, Alter Ego will make the cut. To put it into perspective, I played this game since it was first released in Japanese, and I was using Google Translate to progress through. Even so, it was tremendously entertaining!

So give it a try – I am sure you won’t be disappointed.

Sorcery! is a very popular game among visual novel enthusiasts, and rightfully so. It’s not your typical anime romantic VN, but rather an intriguing and fascinating adventure. You will experience some fascinating narratives, and even be able to cast spells. If that doesn’t scream amazing, I don’t know what will.

Furthermore, there are multiple episodes you could purchase and play. So, if you’re trying to find a unique visual novel type of game, I suggest giving Sorcery! a go – it’s definitely worth the money.

This is a game that could count as a sequel to Gacha World, but with a totally different approach. Gacha Memories is a visual novel that will surprise you with its entertaining interactions and spin-off stories that will keep you wanting for more every single time (at least for myself).

In short, it’s about protecting the memories of people you interact with. But I will not give off too much information, because I don’t want to spoil the game. Oh, and if you are not familiar with Gacha World, don’t despair – you can still fully enjoy Gacha Memories to the fullest because you’ll be properly introduced to the story.

This is probably one of the most casual visual novels on this list. It has no particularly difficult decision-making or mind-bending dialogues, that will leave you questioning yourself for days. It’s simply… casual. It has fun interactions and some graphics that perfectly encompass that.

Furthermore, Lily seems to be the typical happy-go-lucky person. So, if you’re looking for something fun and totally different from anything you’ve played before, give Lily’s Day Off a shot!

Are you looking for a dating-sim visual novel with some dreamy anime demons (or angels, but I personally prefer the demons)? Then look no further – Nightmare Harem is the embodiment of perfection when it comes to that. This game will keep you busy and entertained well beyond your expectation.

It has really amazing graphics, the dialogues are catchy, and the boys are… well, just what you’d expect! If you want my suggestion, I’d definitely recommend Oswald – Oh, and leave Lucas for last!

After playing this game, I would qualify it as a visual novel – a rather interactive and action-packed one. The story revolves around Max, a girl who discovers that she has the power to rewind time.

Life Is Strange is super fun, entertaining, and the more you play it, the more you’ll like it. There is also a second part, which is actually the prequel of the game. I personally didn’t like it as much, but feel free to give it a try yourself. It’s called Life Is Strange: Before the Storm.

These would be my picks for the best visual novel games out there. While some of them are your typical anime VN, others are the complete opposite. Feel free to give them a try and comment down below if you have other visual novels you would suggest to fellow players!