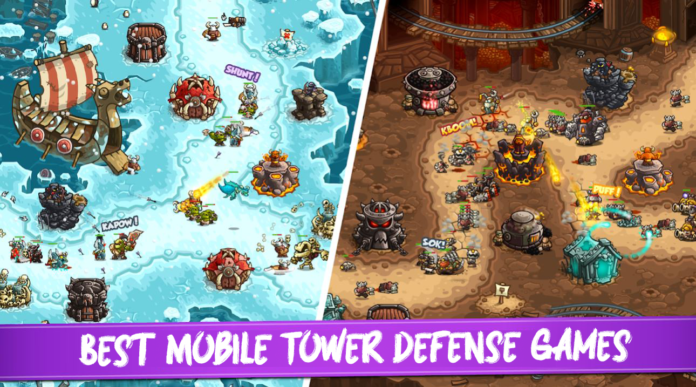 In today’s article we are going to dive into the best tower defense games for mobile to help you find some great games to keep you entertained.

If you like a good strategy game, then I’m sure these types of games are among your favorites – at least for myself, they definitely are. So, if you want to know what the best mobile tower defense games are, you came to the right place. Let’s not waste another moment and dive right into them!

This could be considered a classic – you probably know about PvZ already, and chances are you’ve played hundreds of levels. But did you know there is a sequel called Plants vs Zombies 2?

While the first game leans more towards a classic game, the second one is completely different. You have different worlds, themes, and some really challenging zombies. In both games, you have to plant specific plants to defend your home from a zombie invasion, but if you’re looking for a more challenging one, I feel like PvZ2 is the slightly more difficult one.

Having played through tens of levels in both games, I believe that Plants vs Zombies is definitely a game you should try out if you haven’t yet.

I feel like I need to warn you before you get the game – although it costs only $4.99, this game going to keep you busy for hours. The game has some amazing graphics, animations, and the TD element of the game is extremely enjoyable.

However, the best part is that you don’t need internet connection to play the game – you can play and enjoy it offline and anytime, which you won’t find in many (actually) good TD games. I definitely suggest you should give it a shot.

Clash of Clans is another classic on this list. This game is not only super popular but also extremely good from a strategy game point of view. You have unique characters, towers, spells, and many other elements that give tower defense games a run for their money. If you are looking for a game with a very active community, tons of tasks to do and enemies to fight, Clash of Clans is for you.

I would also add that if you want to play this game as a f2p player, you will have to dedicate quite a lot of time to catch up with the rest if you’re planning to get to the top. The game is quite competitive, because of its multiplayer mode which lets players compete against each other.

This adorable 8-bit game is exactly the type of TD strategy game I find the most enjoyable. You can evolve monsters to power them up, fight enemy machines that are trying to take over your base, and increase your collection of (not-so-fluffy-and-adorable) monsters.

Epic Monster gave me some old school Pokemon vibes, with all of its monster collections and graphics, but otherwise it’s a truly fantastic game. So, if you love pixel graphics and strategy games as much as I do, I am sure you’ll like this game. Give it a try!

As odd as it might look, the game is actually extremely fun and well-made. It has a solid strategy in place, where you have to take down various odd-looking zombies. The game takes a step back from the classical TD type of game and integrates a battle-like mechanic, which makes it stand out.

I didn’t think that it would be a great game at the beginning, but once I started playing it and delving more and more into the levels, I completely changed my mind. So, if you want a TD-type of game, but slightly different from the others out there, make sure you give Zombie Defense a shot.

Alien Creeps is a futuristic TD game where you have to fend off aliens and defend your base. It’s a very cute and casual game (for a TD), despite its name trying to instill fear into you. I believe the chunky 3D graphics of the aliens makes them look rather adorable than fearful. But of course, that’s just me.

I definitely recommend giving it a shot, especially if you like Clash of Clans. The graphics are fairly similar, but the gameplay is different.

If you love a good strategy game with brightly colored graphics, Realm Defense is the game for you. You have your typical TD mechanics, but in addition to that you have tournaments, in-game events, and a super interesting collection of heroes.

The main drawback to the game, however, would be advancing and spending money. At one point it will get quite difficult to progress as a f2p player, but if you really dedicate a lot of time, it can be done.

Tower Defense King is a game that lets you get a taste of every element that makes a good strategy game, and even takes it one step further. It’s truly a fun and extremely enjoyable TD game, where you get to grind near infinite levels.

The graphics are fairly simple, but that only makes the game better without over complicating it. So, for those of you who seek a casual TD, give Tower Defense King a shot – you won’t regret it.

With a unique and bold approach to the game genre, Raon Games really did an amazing job creating Grow Castle. This super fun TD game doesn’t care about rendering super expensive looking towers and units – instead they look like they’ve been created in MSPaint.

But, don’t let these looks deceive you. The game is a solid TD, with great strategic thinking in place and great mechanics. I really suggest giving it a try before you dismiss it, because you’d be surprised to learn just how cool it is.

Moving on to the opposite side of the spectrum, we have Lords Watch – a game with fabulous graphics, that make Grow Castle look like it belongs in a children’s book. The game has a lot of content to unlock, with over 300 levels and plenty of heroes to choose from.

While it is a TD type of game, it has several other elements that make it quite unique and entertaining – you have PvP mode, an endless tower (Magic Obelisk), and several other game modes to keep you busy for hours.

These would be all my picks for the best tower defense games for mobile. Do you have some more suggestions? Make sure you leave them down in the comments section below to be shared with everyone!