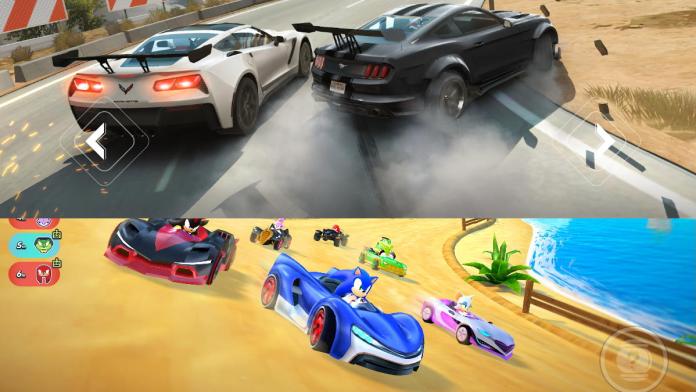 Today Touch Tap Play is bringing on the fast and the furious, as we are going over some of the best racing games for mobile platforms. Racing games are perfect for mobile as you can play them on the go when you are waiting to do your daily tasks. There is always enough time for a quick race or two!

Whether you are a casual racer who loves driving through imaginative tracks throwing items at your opponents or a die-hard car enthusiast who only wants the most realistic driving experience, there is a racing game for you! Here is Touch Tap Play’s list of best mobile racing games for iOS and Android!

Nintendo’s flagship racing franchise is no stranger to casual and hardcore gamers alike, and this time things are going mobile! Mario Kart Tour originally launched last year and racers around the world were excited to finally see the series on mobile.

The classic Mario Kart gameplay you know and love is all here: build your kart from a variety of custom parts, then drive through famous Mushroom Kingdom locales and new tracks inspired by real-world locations!

Dodge red and green shells, banana peels, and the dreaded blue shell as you drift around corners and pick up coins in a frantic race for first place! There are plenty of new items to play with as well, including the Super Horn carried over from Mario Kart 8.

Whether you are rocking the new one-touch simplified control scheme or if you are keeping it classic with the new landscape control mode, Mario Kart Tour features controls that anyone can pick up fast.

With the recent addition of the real-time online multiplayer mode, Mario Kart Tour is one of the most popular racing games on the mobile market right now!

You are probably no stranger to the Asphalt series if you are a racing game enthusiast, but if you are unfamiliar with the franchise, get ready for one of the slickest and wildest racing games ever on mobile platforms!

The latest entry in the series is Asphalt 9: Legends, a beautiful racing game featuring high definition, console-like graphics. Choose from renowned car brands like Ferrari, Lamborghini, Porsche, and more as you built your own dream garage.

Customize cars to your exact liking with the game’s extensive customization system, featuring color painting of every major component on your car to material changing.

Once you have the ride of your choice, head into the game’s Career mode and become a street legend. Race in over 800 events that take place around real world locales, and use the nitro pulse to boost through the race, leaving your opponents in the dust! Boost, drift, and drive off of walls and get big air in some of the fastest races ever!

For those speed freaks looking for a more casual arcade-like experience, Asphalt 9: Legends is the game for you.

CSR Racing 2 is another high-fidelity racing game that targets the same core audience that Asphalt 9: Legends does. While Asphalt is more of a traditional racing game, CSR Racing 2 is a drag racer that focuses on tuning and timing.

CSR Racing 2 features real-world supercars including the LaFerrari, McLaren P1, and more. Grab the ultimate speedster and show the world what you have got in high-octane drag races.

This game puts much more emphasis on tuning and souping up your car, as players are allowed to fine-tune their vehicles to get more performance out of them. CSR2 uses a semi-realistic tuning system, so car enthusiasts will feel right at home.

During a drag race, you are in charge of only one thing: shift timing. Good timing is needed if you want to be the best of the best, as a shift that is just a split second off can make all the difference.

CSR Racing 2 is a great game for those looking for a more focused racing experience.

Between CSR Racing 2 and Asphalt 9: Legends, Rebel Racing can perhaps be seen as the in-between racer. Rebel Racing features full-fledged 3D racing like Asphalt 9 but the physics are a little more towards the realistic side.

Because of this, the game focuses on a more grounded driving experience. Players will shift and turn through west coast locations, but there are no crazy jumps or ramps to go off of – just classic racing.

It should not be a surprise at this point, but Rebel Racing features tons of real world cars for players to collect and tune. The tuning is not quite in-depth as it is in CSR Racing 2, but it still provide players with some customization options.

Drive through beautiful locales and make your way through the main game mode, the Rebel Racing Tournament. Work your way up and become the ultimate rebel!

Rebel Racing is a great fit for car enthusiasts looking for an authentic racing experience.

We will top this list off with something a little more lighthearted. For those younger and more casual racers who want a fast-paced kart racer with plenty of power ups to use, look no further than the blue blur himself.

Sonic Racing is the iOS adaptation of the console release Team Sonic Racing. It is also the only game on this list that is exclusive to iOS, as it is only available on the Apple Arcade catalog.

Sonic Racing features fast and frantic racing on colorful and vibrant tracks, each themed after various past Sonic the Hedgehog games. With a grand total of 15 tracks, there are plenty of places to keep the fun going.

The main mechanic in Sonic Racing is the team mechanic. You do not choose just one character – you build teams of three racers, each with their own unique abilities and powers.

Employ the power of the wisps to hinder your foes, boost your allies, and zoom through the track! 15 wisps are here to keep every racer on their toes, as they can turn the races around in an instant!

What do you think of the list? Try any of these games if you are looking for a fast-paced experience on mobile, and you will not be disappointed! Have any other recommendations for us? Be sure to let us know in the comments below!