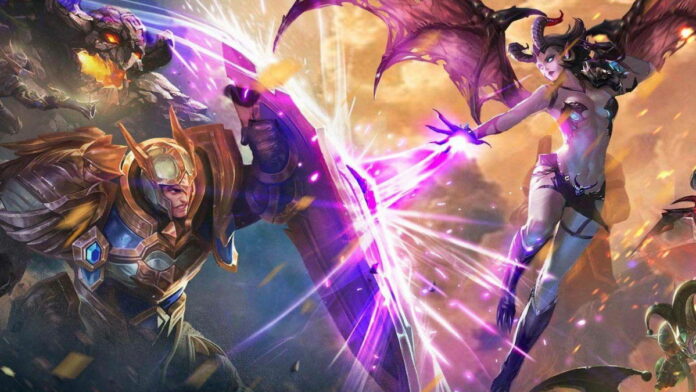 What was once thought to be a genre too complex to ever set foot onto mobile territories, the multiplayer online battle arena – or MOBA – has flourished in recent times. Now, with the big name developers moving their games onto mobile, it’s the best time to get into MOBAs. Don’t know where to start? We’ve got you covered with our list of some of the best mobile MOBAs of 2021!

MOBAs are fast and furious, and as such they may seem daunting if you’re looking to get into them for the first time. Don’t worry too much about this though, as most mobile MOBAs – including all of the ones on this list – are often designed for streamlined entry meaning that they’re easy to pick up and enjoy. As long as you’re in the mood for some competition, strap in and get ready for some of the best MOBAs on mobile!

This one might be cheating a little bit, but honestly we all know that once League of Legends: Wild Rift exits beta and is officially released, most MOBA players are going to flock to it.

Wild Rift is the same PC League of Legends that you’re familiar with if you’ve played before, just redesigned for a more mobile-friendly format. The competitiveness, the strategies – everything is here, and thanks to the ongoing open beta, the hype for it continues to grow.

Already a few weeks into the beta, players are already praising the game for its ability to translate the true League of Legends experience flawlessly into mobile play. Some have even said that the game reigniting their love for the game. Needless to say, it’s shaping up to be the next big MOBA for mobile devices. Keep your eyes on this one.

Update April 2021: Just as we predicted, Wild Rift has officially launched and it has already reached 10 million+ downloads within the first couple of weeks! This cements League of Legends: Wild Rift as the premiere MOBA to play if you’re looking to get into one right now, as the player base is alive and well and of course Riot is constantly improving the game through constant updates.

In 2015, after acquiring Riot Games, Tencent Games requested a mobile version of the world’s most popular MOBA, League of Legends. Riot Games turned down the request saying that the gameplay would be impossible to replicate on mobile devices, which is an ironic echo considering the upcoming release of League of Legends: Wild Rift.

Tencent Games took it upon themselves to make a MOBA for mobile devices, and thus Arena of Valor was born. Essentially League of Legends in all but name, Arena of Valor features 5-on-5 battles with two teams duking it out to see who can destroy each other’s core first.

Featuring a cast of colorful characters, lots of in-depth customization, and plenty of strategies to employ, Arena of Valor made its name by becoming the first real big mobile MOBA. To this day the game enjoys a healthy player base and is the perfect game to try if you’re looking for a mobile MOBA.

Arguably the game that took over the scene, Mobile Legends: Bang Bang is Chinese developer Moonton’s answer to Tencent’s Arena of Valor. Even more similar to League of Legends than Arena of Valor, Mobile Legends was once the target of a lawsuit from none other than Riot Games themselves.

Legal battles aside, Mobile Legends: Bang Bang is probably the most popular mobile MOBA as of writing. There are tons and tons of people playing it at this very moment, and for good reason: with a total of 103 heroes to choose from and multiple game modes to play, there’s lots to do here.

While not as polished as Arena of Valor, Mobile Legends makes up for it with a massive player base and a constant stream of new characters to play with. In addition to the main battle mode, Mobile Legends also sports battle royale and auto-chess modes, giving players new stuff to do if they’re tired of the main game.

Before anything else, Vainglory dominated the mobile scene. Released way back in 2014, Vainglory was unleashed on mobile gamers, showing them that MOBA games could be done on mobile.

It took the established concepts of traditional MOBAs and simplified them for a more user-friendly environment on mobile devices. Mobile MOBAs weren’t really around back then, so Vainglory set the standard and saw immediate success thanks to, well, there being literally no other options.

Even though its player base has dropped off since its release six years ago due to the new kids on the block showing up, the game still has a decently sized community. It’s worth checking out and playing today thanks to the years of polish and refinement.

NetEase Games, another big developer in the Chinese mobile scene, also tried their hands at a mobile MOBA. Basically League of Legends with an anime feel and theme, Extraordinary Ones features a cast of bright and colorful teenage superheroes, each with their own distinct superpower.

Players fight across school grounds in hectic 5-on-5 battles in an attempt to destroy the opposing team’s base. Passive creeps and random items litter the battlefield, and grabbing them and give you an edge on the competition.

Something unique to Extraordinary Ones is the ability to bond with your favorite heroes. You can gift little presents to them which will increase their intimacy, which in turn will make them perform better in combat. It’s a neat little addition to what is a pretty typical – if visually striking – MOBA.

And that’s really what Extraordinary Ones‘ greatest strength lies – its anime style. It shares the same mechanics with most of the games on this list, but its art style sets it apart from the others.

NetEase wasn’t satisfied with just one MOBA, though. Before Extraordinary Ones there was Onmyoji Arena, another MOBA this time themed around the Japanese folklore tales of the Shikigami with a dash of steampunk fantasy design.

Onmyoji Arena, while not as popular as the other MOBAs on this list, gets special recognition from the player base as being one of the most accessible mobile MOBAs. The heroes are relatively easy to get even if you’re a free player, and the unique blend of fantasy anime with steampunk character designs earn it a spot in mobile MOBA players’ hearts.

Part flying game and part MOBA, Kick-Flight is easily the most unique MOBA on this list, and we can recommend it based solely on the concept alone. Kick-Flight is a 4-on-4 aerial action game where players take control of “Kickers,” gifted youngsters that have mastered the ability to fly using their special boots.

Players chose a unique Kicker each with their own special abilities and took to the skies in full 360 control. Fly through the battlefield and take out the enemy team while protecting your base – if it’s gone, your team loses. There are also plenty of other modes to partake in as well.

Unfortunately the developers of Kick-Flight have announced that content drops are now finished and the game will be receiving no more updates, which probably means the game will be shut down soon. We highly recommend giving it a go at least once as it’s one of the most unique MOBA-type games on mobile.

FOG is a hybrid battle royale MOBA featuring a Fortnite-like art style. Players drop into a big battlefield on their own or with a squad of friends using a character they customize themselves. Choose from over 100 different armor parts that not only make your character stand out but also change your stats around.

You also get to pick a class for your character, and this determines the kinds of skills you’ll learn as you play the game. Charge into battle, sneak through the shadows, or control the elements!

We’ve seen hybrid battle royale MOBAs before, but FOG stands out thanks to its polished gameplay and look. It’s currently on the rise as well, so you can expect it to have a sizable player base for a while.

The games on this list should be able to satisfy your MOBA itch if you’ve been looking for a new one to play on the go. We’ll be updating this list as new MOBAs come out, so stay tuned for future updates. Got a favorite mobile MOBA not on this list? Talk about it in the comments below!