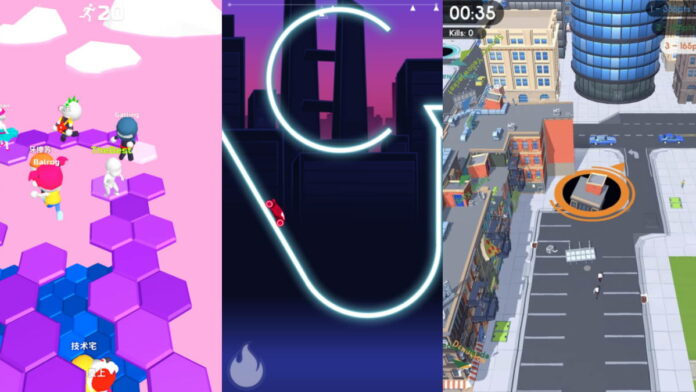 IO games are the perfect kind of game when you don’t know what else to play and you’re just looking for a quick way to pass the time. They’re designed for short play sessions with easy mechanics to pick up and play with.

There are tons and tons of IO games to choose from, and today we’ve gone over some of our favorites. The games of the list make it for their fun value and popularity, so if you’re looking for a new IO game to try we have you covered! Let’s get started with our best mobile IO games list of 2020.

Welcome to Paper.io 2, the colorful game where all players must fight for dominance over the board! Players will control their little customizable color cube as they slide around the board, leaving a trail of their color behind. Drawing a circle with your color will fill the inside, and whoever covers the majority of the board wins!

Paper.io 2 is a fast and fun game with simple rules and controls, which makes it one of the most popular IO games on the mobile platform right now. Voodoo Games has since released another follow up called Paper.io 3D, and while it’s a good game in its own right, a lot of players are still sticking with Paper.io 2.

Do Not Fall.io is a fast and frantic game that is quickly gaining popularity. This game is heavily inspired by the Fall Guys finale game “Hex-a-gone”, as players will jump around to be the last one standing.

All players start on a platform made out of hexagons that disappear when someone steps on them. There are four total platforms, and if you fall all the way to the bottom you are eliminated! Can you be the last one standing on this hectic hexagon party?

The fun of this game comes from the different approaches you can take. Will you play aggressively and try to eat away hexagons as fast as possible to give your opponents less space? Or will you take it slow and conserve the hexagons to be safe? The choice is yours!

Become a massive black hole and devour the city in Hole.io, another IO game from Voodoo. In this city destroying game, players take control of a black hole that grows bigger with every piece of the city that it consumes. Whoever has taken the biggest bite out of the city at the end wins!

Black holes can only eat things that are smaller than them, so you’ll need to work your way up the food chain. Start small by eating things like park benches, trees, signs, then move on up to the gourmet stuff like small houses and cars, then go for skyscrapers!

If you’re big enough, you can even eat other players! Let the black holes consume each other in this fast-paced city destroyer!

If you play a lot of IO games then you are no doubt familiar with slither.io, one of the first IO games to enjoy mainstream success. Despite being several years old now, slither.io continues to enjoy lots of players.

Slither.io is an expanded version of the classic Snake game that you all know and love. Players take control of a colored snakes, and you start small moving around the arena in search of food. Every piece of food you eat will make you grow larger, but just make sure not to crash into yourself!

Once you get big enough, you can challenge other players by surrounding them and forcing them to collide with their own body. Get aggressive and conquer the slither battlefield!

Agar.io is game about giant blobs fighting for dominance on the battlefield. Players take control of a colored blob and start really small. There are tiny blobs scattered throughout the battlefield, and every blob you eat makes you grow bigger.

Eventually you’ll become big enough to start eating other players, which will make you grow immensely! Just make sure that you don’t get eaten yourself, as it’s game over if that happens!

Agar.io is like slither.io in that it is several years old now, but it’s still being enjoyed by players around the world. The quick games are always fun, and the customization options like being able to add your own picture to your blob are great.

If you like your IO games to be a little more explosive, then diep.io is the game for you! Also coming from Miniclip, diep.io puts players in battle tanks and makes them battle it out for supremacy.

Move, shoot, and dodge your way to victory! Take down opponents to earn experience points which you can use to level up your tank and build new weapons. Choose your tool of destruction: will you blow things up with the guided missiles, or go for a traditional machine gun? It’s your choice!

You can even change tank bodies once you get enough XP. You can opt for a more agile but fragile tank, or go for the slow but sturdy bruiser tanks. There is a tank for every playstyle!

Grab your axe and chuck it at your friends! AXES.io is a top-down shooter IO game where players test their aiming skills and try to eliminate all other axe-chuckers on the field!

The name of the game is simple – aim with the virtual joystick, then release to let your axe go flying. Axes travel slow, so your aim needs to be true if you want to land a hit. You can only take a few axe hits, so make sure not to get axed yourself!

Every time you take down a player you earn experience and can level up various attributes, like movement speed, axe speed, axe reload, and more!

Speed through neon cityscapes in Race.io, a 2D racing game where players compete with up to four players in fast-paced online races. With simple controls and fast game times, Race.io is perfect for racers on the go.

Players are only in charge of two things – accelerating and using boost, and it’s all about control here. Zoom through curves, boost through loops, and catch some mad air as you fly for first place.

Race.io also have leaderboard support for players that are really competitive. See how you stack up against the competition in a fight for the fastest thing alive!

Got any other IO games that you really like and aren’t on this list? Let us know in the comments below!