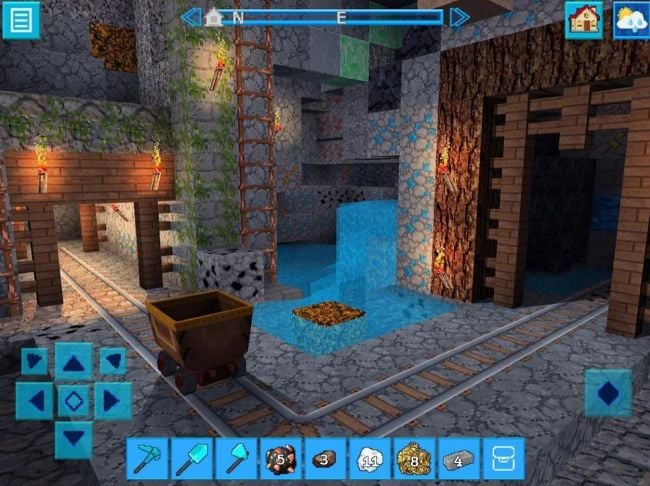 Since you are here, there is no need for introductions – you came to find the perfect game like Minecraft on mobile for you, to probably keep you busy and letting your creativity loose while you’re not on the computer! Am I right?

Well, no matter what your reasoning is, you came to the right place! Because today we will give you all the best free games like Minecraft for Android and iOS to keep you entertained and to have a lot of fun in the process.

If you are not sure what Minecraft is, then you probably haven’t been around the internet for long enough! And that is OK too, because even if you are just curious to test out the genre, these games will definitely do the trick!

So let’s not waste another moment and dive into what you came here to see – our pick for the best free games like Minecraft for mobile!

Very similar to Minecraft, you’re playing in an open world where you have the lead – you choose what you want to do, what you want to build or destroy and you’re also able to ride dragons! I mean, how much better than that can it get?

In Block Story you have more than just a simple world – here, you have stats, you can level up your character, farm and interact with the environment, and have complete freedom over what you want to do, much like in a RPG.

Use the crafting system to get stronger, and don’t let the monsters take you down while you explore all the different biomes and regions of the Block Story world!

You can download the game from Google Play and App Store!

If creativity is your biggest asset, then you can let it loose in this game, because you’re free to make all kinds of customizations – from your character, to the environment and much more!

In Worldcraft you can build the house of your dreams, or even the castle of your dreams! Who is there to stop you? All that you need is resources, which you are free to farm as much as you like!

You can download the game from Google Play and App Store!

A beautiful 3D world which is aiming to kill you – here, you need to survive the harshest of environments and do your best to not let the enemies which lurk in the dark (and not only) take you with them!

In LastCraft Survival you will have to get strong, otherwise you will not survive to tell the story! This game is a MMO which lets you take on challenges such as facing other players, fighting them for various resources, and trying to keep yourself alive by building the strongest tools and weapons!

Adorable and full of blocks – that is Mini World Block Art! A game where you can feel free to create as you wish and to really not have a care in the world given all that is possible to do here!

Because in this game you don’t really have to even go mad about farming, since all the resources are given to you from the start. you can shift all of your attention on the creative part of the game, and that is, building!

Download the game from Google Play and App Store!

Now one of the most similar games to Minecraft that I have found is definitely this one! From the resource farm, to the mounts and many other things, this game has definitely been one which can get you addicted to it in a matter of minutes!

I have to admit, I have really started falling for the game when I realized that there are also mini games within the game! There are just so many features, which when combined with the sandbox building experience that it offers, will just make you want to start making your dream house come true!

You can download Realm Craft from Google Play and App Store.

With my love for pixel games I couldn’t just let this one slip! This game is a pretty one, which is super simple and given that it’s been created by an indie developer, it’s definitely a good game!

In LostMiner you are basically playing Minecraft, except from another perspective… and more pixelated (arguably). The controls are pretty simple and all that you really need to do is survive!

You can destroy pretty much anything in game, and as you know, there are plenty of secrets in Minecraft – well, this game has some of its own too! So give it a shot and try to discover them!

Blockman Go is a fun and super interactive game, which will let you customize your avatar however you feel like, and interact with all kinds of different people! In this game you can join others in playing various mini games, chat and even make tons of friends!

While this game is more multiplayer than the original Minecraft, you can still enjoy 3D block graphics as well as many other fun stuff! For one, the character customization is one of my favorites!

So if you’re more of a person who likes to chat, have fun and socialize, then this game is definitely worth giving a shot!

You can download Blockman Go from Google Play and App Store!

Now the crafting system is super similar to many other games in this list, but that’s just because of the game genre. Exploring, crafting and surviving are the number one priorities here, so if that’s what you want, then you’ll have plenty of titles to check out!

You can find the game in Google Play and App Store!

Dinosaurs and blocks? Check! That’s exactly what Jurassic Craft offers, all combined into a beautiful block building game which can get dangerous! Here you can enjoy both creative and survival modes, which can let you play a more casual game, or the survival experience of your lifetime!

I mean, who would dare try to survive next to a big T-Rex while trying to build a small hut and stay alive?! Also, if you have never seen 3D block dinosaurs, then you really need to check it out!

You can download Jurassic Craft from Google Play and App Store!

I can’t help but put here my very biased opinion towards pixel graphic games which let you build and so much more. And that is why, I took this chance to add Terraria to this list! If you’ve heard about the game, then you probably already know just how great it is!

And even though Terraria has been around for quite a while now, the game is truly good and if you don’t really want to play a Minecraft like game (graphic wise) on mobile, but you want to build and let your imagination be the limit, then you should definitely try this one out!

Because you can build your very own world in this pixel game, I considered it to be quite Minecraft-y like, but if you are looking for something more close to Minecraft, then you can keep scrolling down to see the other titles!

You can download Terraria from Google Play and App Store!

Note: The game is not free, but if you want a good game, and you are willing to spend some money, then I really suggest it!

These would be our picks for the best free games like Minecraft on Android and iOS! Do you know some more cool games that you would like to share with the rest of us? Leave them down in the comments section below!