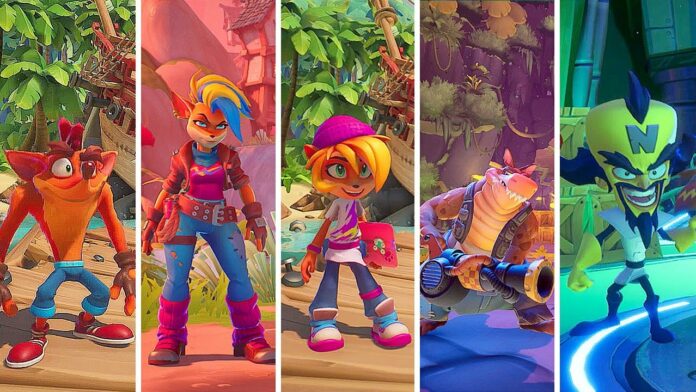 Crash Bandicoot is one of the classic gaming franchises that remain popular to this day. These are platform games in which players control a Bandicoot named Crash. Even those people who have not played these games know this memorable character. However, there are also other characters in the games of the series. And in this guide, we will tell you about the characters of the Crash Bandicoot series that can be seen in games on mobile devices and the Nintendo Switch.

Let’s start with the main character of the whole series. Crash is a rather lazy Bandicoot who only wants to relax on the beach. And for this quality, many fans fell in love with him.

Crunch is a huge, beefy Bandicoot that first appeared in Crash Bandicoot: The Wrath of Cortex. And although he is an antagonist, many fans perceive him as Crash’s brother. He was also seen in Crash Team Racing Nitro-Fueled on the Nintendo Switch.

Now, let’s move on to Crash’s sister, whose name is Coco Bandicoot. Players first saw her in N. Sane Trilogy, and then she began to appear in subsequent games. However, the debut game could be considered Crash Bandicoot 3: Warped, in which players had to play certain levels as Coco.

Next Aku Aku. This is the mask that helps Crash and Coco during all their travels. Although there are other masks in the game, Aku Aku is a classic.

Tawna is another Bandicoot that Crash meets while traveling. Moreover, it has two versions. The first is from the original game and the second is from Crash 4: It’s About Time. Tawna gives players a great fun game experience. And then you can see the list of other characters from this exciting franchise:

RELATED: How Many Characters Are in Mario Strikers: Battle League?

Which are your favorite characters in Crash Bandicoot? Let us know down in the comments section below!