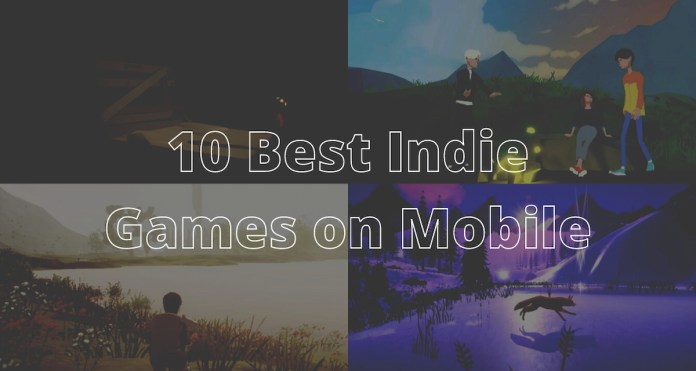 The indie games scene is one that is often overlooked not only on mobile but on console and PC as well. However, there are lots of unique and fascinating indie games out there from talented independent developers.

These games come from solo Devs to a team of independent video game creators. Indie games have been known to always go with the open-world genre, and they’ve made their way to become some of the best open world mobile today.

So in this article we’ve made a list of the best Indie games on mobile that you should play but have no idea some of them even existed.

Traffix is a highly addictive game that allows you to control the flow of traffic in a fascinating way as you decide when cars will pass to avoid a crash. Players take control of an ever busy highway filled with angry and stressful car owners in big cities such as Tokyo, Paris, Las Vegas or Istanbul.

It’s up to you to control the traffic and keep the drivers safe. The game is based on minimalist features, simple rules and a surprisingly addictive gameplay that will amaze you within a short period of time.

Gris is a stunning animated platformer that takes you into the world of a naive female protagonist named Gris. The game offers an evocative experience for players by being free of death, danger and frustration. You get to explore a fading world that’s brought to life by a fascinating work of art, detailed animation and elegant score.

There are times when the game will feel like a complex of emotion that utilises its stages as a canvas for a gorgeous platformer design, and other times it’s a complicated game that shows off its artistic ambitions through its gameplay.

Wilderless is an indie game that emphasizes on showcasing its undeniably beautiful open world with so much to discover. Players who enjoy open world games are especially going to appreciate the world that Wilderness offers as it is free of enemies, missions or any type of quests.

It is a fully fledged open world game that allows players to do one thing explore. Wilderless will leave you wondering just where to go or what to do next. You can use your shapeshifting abilities to become different kinds of land animals, or you can decide to soar the skies as a bird if you prefer to enjoy the view from above.

Even though its been more than 10 years since it made its way to critical acclaim on mobile, Limbo is still making waves in the indie games scene as one of the most amazing and outright breathtaking indie games ever released. The game allows players to embark on a journey with a boy in search of his sister.

Apart from the basic controls, the game doesn’t explicitly show or give further clues to the player. Its vague plot is narrated by the thrilling and intriguing environments, offering a captivating story and an emotional ending that will leave players stunned and gratified.

5 – Sky: Children of the Light

Sky won the Best iPhone Game of 2019 award and made its way to Android in April 2020. The game didn’t take long to instill it’s gorgeous gameplay into the hearts of players. It is a dazzling social adventure game where players can roam freely on land or soar the skies in a heaven-like world.

It offers realistic character movements and above all, a unique experience on mobile devices. Sky also offers a soothing soundtrack and an impressive multiplayer experience that allows you to soar the skies with family and friends in an heaven-like world.

This is a captivating and well-represented game that tells the story of a teenage kid on a northern Norwegian island. The game reeks of exploration game in both the storyline and gameplay mechanics. Play as Jesper, a 17-year-old kid from the mainlands of Norway who is on a mission to return a magical bracelet to an island.

The beautifully crafted island of Slepp feels large in scope with an ambient design and feel that would make most players feel relaxed and at home while exploring the island. The game contains a lot of features like climbing mountains, fighting with drunk sailors, breaking into churches and abandoned homes in this epic adventure with characters and objects that players can interact with as part of the story progression.

Ever thought of just becoming a bird and soar the skies freely? Well now you can. This is a meditative flying adventure game that offers not only an amazing graphics, but also dynamic time of day and night weather patterns. You can fly as a raven or use your shapeshifting abilities to become a monk and explore the open world on foot.

There are no predators, hunters or natural dangers. You’ll enjoy the freedom to fly, explore the vast open environment with beautiful natural views. Cross the trees, fly through the jungle and conquer the highest peaks. Nothing can stop a bird in the wild or a monk in complete solace.

The First Tree us a beautiful third-person exploration game that tells two parallel stories. The first is that of a fox trying to find and rescue her missing family. The second is that of a son reconnecting with his estranged father in the heart of Alaska.

Players get to take control of the mother fox and onto a poignant and astonishing journey through a fascinating open world that crescendos at the source of life and perhaps result in an understanding of death. On this journey you’ll encounter artifacts as well as stories from the son’s life as he becomes intertwined in the fox’s journey towards The First Tree.

Alto’s Adventure is an endless snowboarding arcade which allows players to journey across the gorgeous alpine hills of their native wilderness and long-abandoned ruins. A fun fact about the game is that unlike the majority of endless runners out there, Alto’s Adventure wasn’t designed to be difficult in such that you’d die after every run.

However, it becomes challenging when you stumble upon a mountain elder who will stop at nothing to put you down. Along the lines you’ll rescue runaway llamas, leap over scary chasms, grind rooftops, perform backflips and soar the ever changing passage of time in the mountains.

INSIDE is a fascinating and incredible platformer that will most certainly leave you astonished due to the challenging and interesting puzzles.

The tone and animation style of this game are simply hypnotic. And similar to Limbo, there are no tutorials or cut scenes to tell you what the story is about, you figure it out as you play as a boy who is trying to escape from what seems to be a research facility.

Playdead’s Inside offers challenging puzzles, an enriching atmosphere, and a storyline that is both disturbing and alluring at the same time. This is a game that deserves to be played in order to fully appreciate the whole concept.

There are lots of amazing indie games out there that did not make our list. A couple of the ones that did make the list are paid games, which means you have to pay real money to play them or buy the complete game. So if you discovered a game from our list, consider buying the game from the App Store or Google Play Store in order to support these independent developers who put a lot of time and hardwork into making these games.