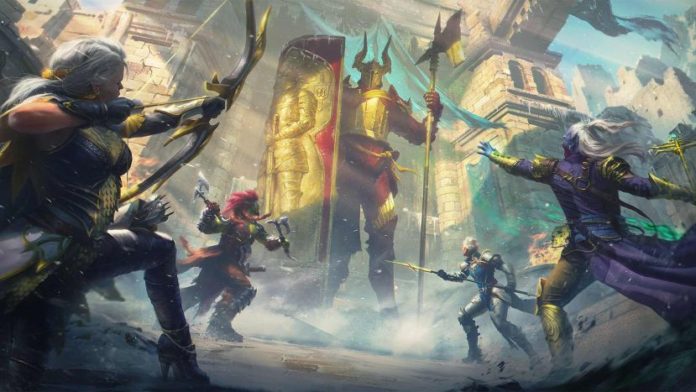 Gacha Games took over the mobile gaming world in 2019, with tons of amazing games being released on Android and iOS. And today we’re taking on the really difficult task of sharing with you the best gacha games for mobile to play in 2020.

If you are an avid gacha RPG player, these games will probably keep you glued to your device more than they should – but you know you will like it! You probably have tried some on our list already, but if you didn’t, it’s time to do so!

Without further ado, these are our top 15 best gacha games for mobile in 2020, in no particular order:

This will have to be among the best mobile games that I have played! Literally. It’s catchy, combines mecha with anime and CGI stuff and it also packs quite a funny story.

The gacha system is pretty catchy too! It is a great choice if you want to enjoy good graphics, try your luck with the RNG and have a good and chill time. The game has a ton of events and an active community, so that is a major plus!

Definitely not for the faint hearted or the younger audience, because this game has quite some… unique graphics and characters (to put it mildly). Beautiful girls and revealed skin sells today – even when we’re talking about mobile games – but behind the luring visuals, there’s actually top quality waiting for you to find.

The game itself is very animated and interactive, and you can have a lot of fun playing it if you like good graphics and snatched from reality anime girls (and old men).

The “good graphics” warriors (who don’t play a game for its game play, but rather for its graphics) will have nothing bad to say about Langrisser, since it combines amazing animations with stunning 2D and 3D graphics into a turn based classic RPG that has pretty much everything you could’ve wanted from the genre: cute chibi battle characters, strategic thinking and “gifted” girls.

If you like animes, it’s impossible that you haven’t heard of One Piece or watched it. This game features all the anime’s characters or at least the most important ones – but it doesn’t mean that it’s a game only One Piece fans will appreciate.

No, this is a great gacha game that will keep everybody entertained: it’s a fun and exciting capture the flag kind of game which lets you play as one of the anime’s characters and use their skills in battle to prove your supremacy.

You don’t have to be a kid to love this marvelous gacha game featuring all sorts of Disney heroes battling it all out in various game modes! So even if you enjoyed that Wreck-It Ralph movie at 90 years old or at 12, you will still find Disney Heroes: Battle Mode extremely addictive and high quality..

Because it has that many famous Disney characters, you will have to decide on just a few that should make it to your team (but still collect them all, of course!). I mean, Wall-E makes the game all in itself worth it, so give it a try!

You want to save the time and space? You want to be part of an epic anime line up? You want to fight, but not really? Well, this game has it all!

Kinda like a visual novel combined with a great RPG in the anime style, you should definitely give this game a try, especially if you watched all the animes prior to it (which is what got me interested in it in the first place).

This is a game that follows the very famous Final Fantasy franchise, so it’s kinda impossible not to have heard about it before. Just like with the other Final Fantasy games, you will have a very good time if you like the genre.

The amazing graphics combined with the fun and exciting play style and interesting story line, bring it in my top 3 gacha games ever. And even though this game is not getting younger, it can still pack a punch and keep you entertained with all its heroes available for collecting, with all the action and events regularly taking place. Give it a try!

A world-famous line up of superheroes: everything that you could expect from Marvel, with a bit of sugar sprinkled on top! This is what Marvel Strike Force is all about, so if you are not into the anime visuals and Disney ones, this one’s the obvious choice for you. Of course, even if you love anime, you can still fully enjoy Marvel Strike Force!

Since some of the characters are not as hard to obtain as in other games mentioned in this article, this game is perfect for the casual player who also wants to spend some RL time, but also enjoy a good RPG game as a free to play player.

Downlod on iOS and Android.

I suggest not playing this game out in public, as some of the loading screens might make the other people question your actions. That’s right, this game is another not-so-kid-friendly one, with good (actually, quite amazing I’d say) graphics and systems in the anime style.

Having the cool graphics and play style, it draws many people in and keeps them hooked, so the community is also quite active and helpful! It’s definitely a must-try if you like the genre.

The childhood hero of many people, and the one others couldn’t stand: Goku will be among the famous characters you can get in this game, because, let’s be real, it would not be Dragon Ball Z without him.

If you like loud screams and action packed anime inspired games, this is the gacha game for you!

It’s almost an unwritten rule here: if you have a Marvel game on a top list, you definitely have enough quality in a DC game as well. And with Battle for Justice, justice is made for DC and its fans!

With over 90 characters to collect – all heroes and villains from the DC universe, you will be tasked to create a super-team of super-heroes and super-villains to super-win super fights. OK, so, you got the idea – it’s your supe… top quality gacha RPG set in the DC universe. Try it!

This is a game that has been with us for quite some time now, but which still manages to amaze and remain relevant in today’s world, even though its gameplay mechanics and visuals might seem a bit rough around the edges.

But with over 400 heroes to collect and tons of things to do in the game itself, Brave Frontier remains one of the ultimate gacha games available on mobile right now and one of the most popular ever released. And, after all this time, it remains as beginner-friendly as possible, so if you haven’t tried it already and you are a fan of the genre, do give it a try!

An amazing RPG game that mixes deep strategic thinking with rarely seen hero customization, RAID: Shadow Legends is one of the more recently launched games on our list, but definitely one to stay.

With great graphics and a huge community playing the game each day, this is one of those title that had to be released on mobile to prove to the entire world that really high quality games can be created for mobile platforms and available for free.

I might be a bit biased here, since I’ve been a major HoMM player back in the days, but I still consider that Ubisoft’s Might & Magic entry in the gacha genre is really solid, even though extremely demanding in terms of time you have to invest into playing the game itself.

With both heroes and units available for unlocking and tons of customization options, as well as various modes of play, including PvP, the game is actually much better than many people say it is, so if you haven’t done so already, do give it a try! You will probably be pleasantly surprised!

This can probably be considered THE game that started the entire gacha RPG craze back in the days. If not, it’s definitely one of those legendary titles that wrote mobile gaming history – and still does to this day, by remaining insanely popular after being released back in 2014. That’s like 1,000 years in mobile gaming-age.

This is a game that kept evolving, getting better and better as time went by – so if you somehow missed it all these years, do yourself a favor and try it now. And even if you tried it back in the days and uninstalled it at some point, you can consider it safe to reinstall and take it for a few more spins.

These are all the games that we have considered to have something special and thus made it to the top 15.

There are many other good games that almost made it to our list, but the top 15 we have listed here have something that we considered special, different than all the others (I mean c’mon, there is a Disney one, which is pretty amazing too!).

If you have other suggestions or opinions, don’t hesitate to share them with us by commenting below. We’re curious to see all your favorite games, be them newer or older ones!

Panda Cube Smash Guide: Tips & Cheats To Get All Stars