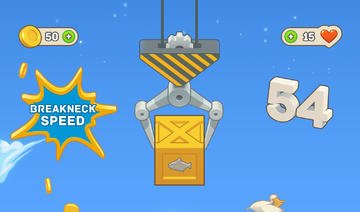 Cargo King is a physics based game which puts your balancing skills to the test. The idea is to drop as many boxes on top of one another until the pile topples over. The game although simple in its conception is hard to master. There are certain techniques which you can use to help you get a higher score. The key element is to try and keep each box as central as possible. Hopefully this Cargo King Cheats: Tips and Strategy Guide article will help tip the scales in your favor.

1. Timing
The first issue you will encounter is the timing of the drop. If you can get into a rhythm of when to release each box it will help keep the boxes in a sustained row. There will be occasions when a box will fall off centre and land towards the right or left. When this occurs make sure you counteract this by placing the next box towards the opposite direction.

2. Weight
The weight of the boxes has to be considered, as it is an important part of the balancing act. There are wooden and metal crates. The metal crates are deliberately heavier so bare this in mind when judging the trajectory for when you release this box.

4. Speed
The second way to gather the maximum amount of coins is through your speed. This is determined by how quickly you can release each box. Each box will come from across the screen from either the left or right hand side. If you miss time the drop then this is not a problem, as you will not be penalised for this and you can just wait for another to appear. However releasing each one on the first attempt will earn you a “Breakneck Speed” prompt on screen. This will appear after five consecutive drops.

5. Rewind function
Do not be too disheartened when mistiming a drop, as you will initially receive two attempts to fail for every turn. The game will rewind itself for the first failure. When this does occur, pay attention to the direction in where your pile falls either left or right. This will help you judge where to drop the box for a successful second attempt.

6. Where to tap
You can tap anywhere on the screen in order to release each box. However the best place to do this is on the box already stacked. This is useful as it will allow you to time the drops and also keep your pile as even as possible.