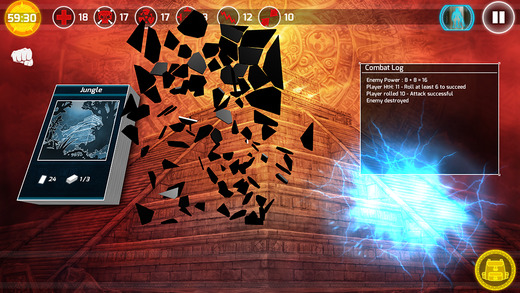 Chainsaw Warrior, the adaptation of the board game by the same name released on the App Store a while back, has finally received a sequel.

Chainsaw Warrior: Lords of the Night features the same engaging but brutally difficulty gameplay experience of its predecessor. The scope of the new adventure is also much bigger than in the previous game, as players now have to save the whole world and not just New York City. And they have to be really quick in doing so, as they only have 60 minutes.

In Chainsaw Warrior: Lords of the Night, players will have to venture into the jungle, face hordes of Aztec Zombies, dodge deadly traps and hunt down and destroy the horror known as Darkness. To do all this, players will have to use a variety of cards, including three new decks including enemies, weapons, equipment and traps. Just don’t expect to complete the game easily and be ready to die over and over and over.

Chainsaw Warrior: Lords of the Night is now available on the App Store for $5.99. Make sure to check the game out if you’re a fan of the first game as the new one expands on the gameplay experience of the original Chainsaw Warrior in several different ways.