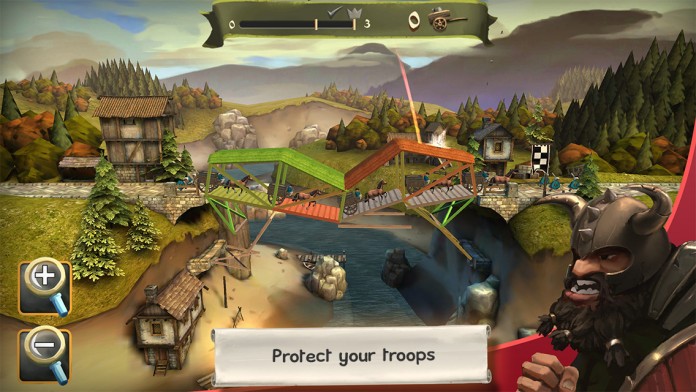 Physics based puzzle games are quite common on the App Store. Despite being so common, there are a few games that stand out thanks to their unique take on the same basic gameplay experience.

Yesterday we have covered some tips for Lil Smasher, a physics based game where gamers have to destroy artifacts to be able to complete each stage. Today we’ll be covering a game that requires players to do the exact opposite – build a bridge with different materials and make sure it’s stable enough to support the weight of soldiers, wagons and more.

We’re talking about Bridge Constructor Medieval, a game developed by HeadUp Media as a a new version of the successful Bridge Constructor. If you’re playing the game and need some help, keep on reading for some tips and tricks that will certainly be useful to you.

When playing Bridge Constructor Medieval, you have to always keep in mind how real bridges are made. The game is pretty well done in this regard so if you make a bridge like the real ones in the game, there’s a good chance that it will hold all the weight placed upo it. For starters, it’s always a good thing to make bases that are arc-shaped for better weight support. In general, triangle shapes offer great stability so it’s always good to use them for any bridge you’re building. As far as materials are concerned, stone is the best of all since they will resist pretty much everything, boulders included. It’s expensive, that’s for sure, but you really won’t have to fear anything if stone pillars are supporting your bridge.

The middle sections of each bridge are always going to be the most vulnarable for obvious reasons. Don’t be afraid to reinforce them as much as possibles by using strong materials. If you see the boards turn red during passage, it means that the bridge won’t hold, so make adjustments accordingly.

Some stages will include some really heavy boulder launching, meaning that even reinforcing the bridge or using stone pillars won’t be enough to keep the bridge in one piece. This is what roofs are for, protecting from heavy boulders. The same rules for building bridges apply here – the sturdier and better supported they are, the harder they’ll break.