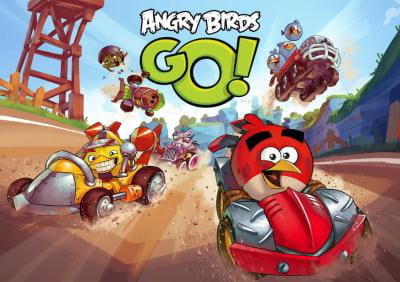 Even though the game has just been released, Rovio has already announced a new update for the kart racing game Angry Birds Go!, a spin off of the highly successful Angry Birds series.

The new update, which should be released during Spring 2014, will introduce a brand new multiplayer mode. To tell the truth, Rovio should think about fixing the game’s mechanics first before add new features. Still, the multiplayer mode could make the game slighty funnier than it is.

In our review for the game, we have noted how Angry Birds Go! is a decent game that’s completely ruined by the free to play features.

The racing mechanics are quite good, to be honest, but the constant grinding to accomplish something, the constant wait time and the locking of contents behind a paywall does very little to make the game fun.

The game could be fun for those gamers who have a high tolerance for the free to play mechanics since the racing part is actually well developed. Everyone else will get tired of the game very, very soon, feeling really frustrated. It’s a shame, because the game could have been way better if developed as a paid game.

Angry Birds Go! To Receive A Multiplayer Update During Spring 2014﻿﻿